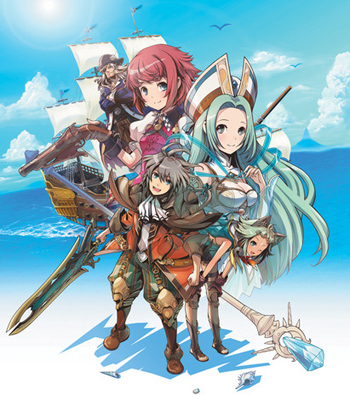 Our five main heroes.
It's not about right or wrong. You want to do something and then you do it.
— Ishut
Advertisement:

Unlike the other Episode II games, Gloria takes place on an entirely new world. After rumors surfaced of the treasure of the lost kingdom of Euforia, a crystal containing a large amount of their main source of power, various pirates started searching for it. One such band of pirates, led by the naive young boy Ishut and his catgirl friend Pinger, has also embarked on this adventure. Unlike most other crystal-hunting pirates, however, Ishut and Pinger have a mysterious guide named Ruru who can sense the crystals and promises to lead them to the treasure.

However, at the same time their adventure begins, the Lukia Empire—the dominant world power—places a huge bounty on Ishut, causing pirates and mercenaries everywhere to chase after him. Ishut's newbie adventuring band seems doomed, but is rescued at the last moment by Elisha, a sharpshooter Pirate Girl who belongs to the famous Gloria band. She and her father Zazarland know what Lukia is up to, and are determined to keep Ishut and Ruru out of its leader's hands at all costs.

Many of the usual culprits are involved with the game's production, although the new main artist is Radiant Historia's Hiroshi Konishi rather than Satoko Kiyuduki or Rui Kousaki.

Due to its fresh setting and various subtle changes to the classesnote We have guns now! and cardsnote They are remarkably similar to the ones Nessiah invented, containing most of the preexisting deck—even the Riviera: The Promised Land-referencing fake Grim Angel card, Gloria remains an Epileptic Tree farm even after its release.