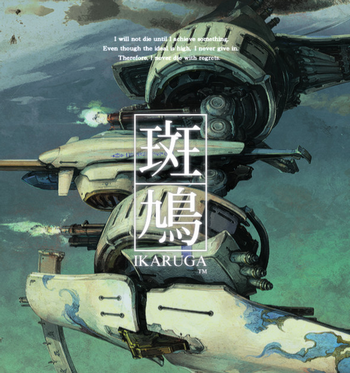 "I will not die until I achieve something.
Even though the ideal is high, I never give in.
Therefore, I never die with regrets."
— Proverb that appears on every startup of the game
Advertisement:

Ikaruga is a modernized take on the "Bullet Hell" school of Shoot 'em Ups, developed by Treasure. It's widely regarded as one of the best examples of the genre, and a follow-up to Radiant Silvergun.

Here, everything comes in one of two polarities: black or white. Black ships fire black shots, and white ships fire white. Your ship is unique in that you can switch between the two polarities at will. Your ship's Battle Aura can absorb bullets of the same polarity, but is destroyed by shots of the opposite polarity. However, your shots do damage to both polarities, with double damage to targets of the opposite polarity, giving you the option to fly with your defences down to increase your offensive power. Absorbed bullets charge up your special attack, a homing Beam Spam. Finally, the scoring system allows you to accumulate "chain" multipliers by destroying three enemies of the same polarity in a row.

That's all there is to the game: no other gimmicks, no other features. Just five levels of careful design, switching polarity, and more bullets than you can shake a stick at. Ikaruga is a work of art that way: it takes a simple idea and plays that idea to its most logical extreme. All five levels are That One Level in one way or another, but there is something to be said for elegance.

Released as an arcade game (using the Sega NAOMI platform) and on the Dreamcast in Japan in 2001, it was later ported to the GameCube around the world in 2003. In 2008, it was ported to Xbox 360 via Xbox Live Arcade. In 2013, a port of the game was released for Android smartphones. A Windows PC port based on the Xbox 360 version of Ikaruga was greenlit

for Steam, and consequently released on February 18, 2014. A version for Nintendo Switch was released on May 29, 2018, followed by a PlayStation 4 port on June 29 of the same year.

WARNING: The big list is approaching at full throttle. According to the data, it is identified as Tropes. NO REFUGE

"Is this what we wished for?
Don't worry, we will understand each other someday.
And the life is succeeded into the distant future."
Feedback

Anyone up for a game of EXTREME Laser Tennis?

Anyone up for a game of EXTREME Laser Tennis?