Visual Novel / If My Heart Had Wings 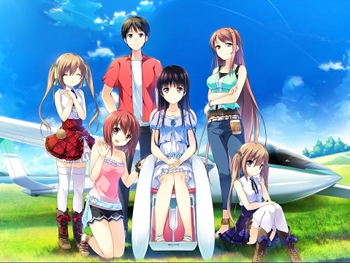 After a knee injury forced him to retire from bicycle racing and his own emotional discomfort made it hard to stay at his old school, Aoi Minase fled back to his home town, both enrolling in the local specialist school and agreeing to act as the caretaker for a girl’s dorm. There he meets the surly, wheelchair-bound girl Kotori and soon meets up with an old friend of his, Ageha. Together with the bizarre genius girl Amane, they revive the Soaring Club from the brink of death and begin working on constructing and flying a new glider after the partial destruction of the old one before they arrived.

See also A Sky Full of Stars, another Pulltop title taking place in the same setting.

Not to be confused with the Faith Hill song.