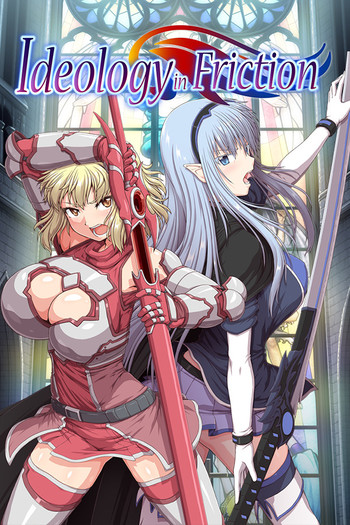 What will become of you?note From left to right: Clacier Berg, Annette Stole
Ideology in Friction is a Roleplaying H-Game created in RPG Maker by ONEONE1. Originally in Japanese, it was translated by Kagura Games and released fully censored on Steam in 2019.
Advertisement:

Clacier Berg is an elf. This has been a problem her whole life. As a bullied youth she made a decision: to join the Knights of Viktor and earn a living as a respected member of society. Years later she has done just that. Joining the dangerous Special Forces with the Ragtag Bunch of Misfits that serve as her graduating class. With the help of these True Companions, she will battle deadly foes and crush resistance in the name of the Kingdom of Viktor.

Unless you had other plans.

The main story dives into the heart of conflict between multiple factions and the corrupt government of ViktorBerg. Uncovering the whole story of Ideology in Friction takes the player down multiple paths, exploring the backstories of several characters. Clacier must delve into the darkest recesses of the kingdom, learning the true history of a conspiracy spanning generations. It is a journey that will change her, but the nature of those changes is up to you.

Ideology in Friction provides examples of: