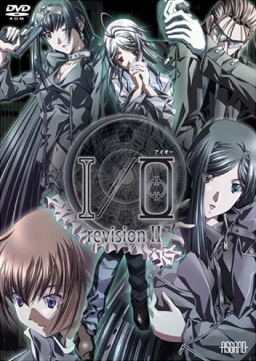 Also known as I/O. This is the first original game by the company Regista, founded by Takumi Nakazawa of the Infinity series fame, and a collaboration between Nakazawa and Romeo Tanaka (of CROSS†CHANNEL, Kana: Little Sister and Yume Miru Kusuri fame).

I/O takes place in the year 2032. A lunar eclipse occurs in late April, causing a surge of terrorist activities and bizarre incidents. As time goes on, things get worse and worse, with the key to the mystery seemed to be locked away in the MMORPG "Babylon". Four people, through their own ways, investigate the ongoing phenomenon, each one dealing with his or her own problems...

I/O, like the Infinity series, has multiple protagonists, in this case four. Route A features Hinata Aoi, an Ordinary High-School Student who has become depressed after the disappearance of his twin sister, Mutsuki. Route B features Ishtar, a young woman in charge of a hacking group known as Criminal. Route C also features Ishtar, but she seems different from herself in Route B. Route D features "HE", a mysterious man who is a legend on the Internet. Once all four of their routes have been completed, they unlock Route E, the true route.

The game was originally released on the PlayStation 2 in 2006, but was given an Updated Re-release on the PC two years later, with new CGs and slightly updated artwork (as well as giving sprites to many characters who didn't have any in the original).

A fan-translation was released by Lemnisca Translations