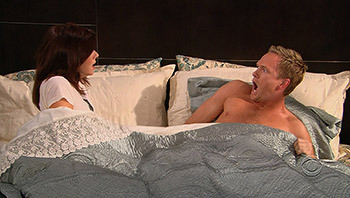 Believe it or not, alcohol did not play a role.
Wade: Must have been some party, though, right?
Sam: You wake up in a strange bed with a strange man, and your first guess is "party"?
Wade: Strange people in a strange bed sounds like a party to me, man!
— The Strangerhood
Advertisement:

Someone (usually a guy) wakes up in bed, and the audience assumes he's alone. But then either he moves or the camera pans, and we see there's someone else. Usually, it's implied that hanky-panky has just taken place, and if it hasn't, the guy will either anxiously ask for confirmation, or just assume the worst with hilarious consequences. Sometimes, it's used as a Secret Relationship reveal, occasionally by subverting the trope — the audience is shocked to see the characters together, and then further shocked when the characters themselves aren't shocked. A common variation is to have the guy wake up to find another guy in his bed. In that case, either he's really anxious to ask for confirmation about why he's there, or he's too afraid to ask. Harem Genre loves this to death.

If the character is usually The Casanova and wouldn't be too put out to find any old stranger in his bed, the partner may be an Abhorrent Admirer.

With a little bit of tweaking this can also be a Horror Trope - say if the hapless victim rolls over in bed to find the monstrous villain in bed with them. Of course, the sexual connotations to this aren't an accident. Another variant is The Murder After, when the surprise bedmate is a freshly murdered corpse—or even part of one, particularly the head.

See also What Did I Do Last Night?. Contrast with Not Staying for Breakfast. Also compare and contrast Interrupted Intimacy and Bedroom Adultery Scene, where they're discovered while doing the deed.

Morgan Finds Carina In His Bed

Morgan freaks out when he wakes up to find a flirtatious Carina sleeping next to him in his bed.

Morgan Finds Carina In His Bed

Morgan freaks out when he wakes up to find a flirtatious Carina sleeping next to him in his bed.