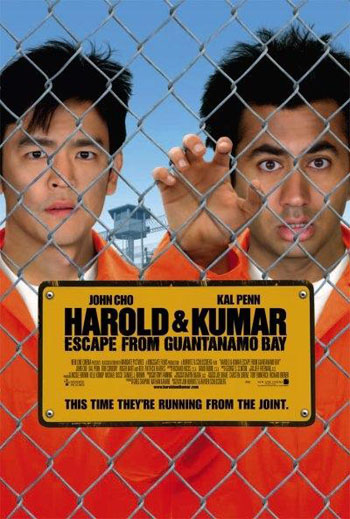 Picking up right where the last movie left off, Harold (John Cho) and Kumar (Kal Penn), fresh from their trip to White Castle, have decided to follow Harold's neighbor Maria to Amsterdam. On the plane Kumar and the bong he brought on are mistaken for a terrorist and a bomb, and Kumar, along with his "North Korean accomplice" Harold, are thrown in Guantanamo Bay. The two escape and head to Texas, pursued by an overzealous Deputy Secretary of Homeland Security (Rob Corddry). An old friend of theirs, Colton, is getting married to Kumar's ex-girlfriend Vanessa (Danneel Ackles), and has invited President George W. Bush to the wedding. Harold wants to get a pardon; Kumar wants to ruin the wedding after wanting to reconnect with Vanessa as well as Colton betraying them.

Example of:
Our Presidents Are Different