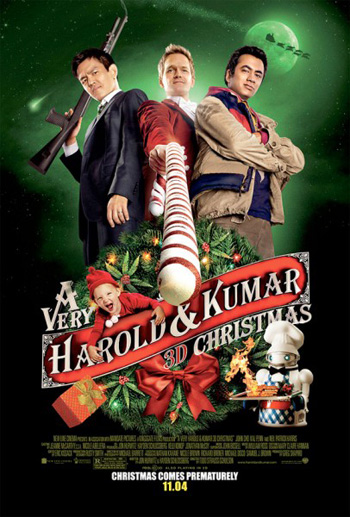 Six years have passed since the two escaped G-Bay. Harold (John Cho) has married Maria, went on to become a wealthy Wall Street businessman and moved out of the apartment into a decent two-story house. Kumar (Kal Penn) is still living in the apartment, was expelled from medical school for failing a drug test, unemployed and single after breaking up with Vanessa (Danneel Ackles). When circumstances bring them back together, Kumar accidentally destroys a beloved Christmas tree belonging to Harold's father-in-law (Danny Trejo) and our heroes frantically search for a replacement before he finds out.

Filming was delayed because Kal Penn took a leave of absence from Hollywood in 2009 for an indeterminate time to work for the Obama administration. In 2010 he left the administration so that work can begin on the third movie, in probably the first case of a public servant leaving to pursue acting in a stoner comedy and then allowed to return immediately after.