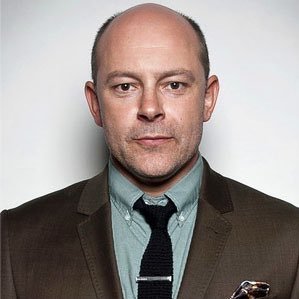 Robert William Corddry (born February 4, 1971 in Weymouth, Massachusetts), commonly known as just Rob Corddry, is an American comedian. He's best known for being a correspondent on The Daily Show with Jon Stewart from 2002 to 2006, a role that he's still commonly associated with over a decade later. Like Stephen Colbert, John Oliver, and others, he's go on to a successful career since leaving the program, starring in a bunch of films including Hot Tub Time Machine (2010), Warm Bodies (2013), and Office Christmas Party (2016).

He won his first and second Emmy Awards in September 2012 and September 2013. Both were for his work in Childrens Hospital, which he didn't just star in but also wrote for. In terms of his personal life, he's been married to Sandra Corddry since 2002, having two kids. His younger brother Nate, born September 8, 1977, is an actor as well.note If you're curious, they look nothing alike, to the point that Nate busts his brother's balls in public by saying that Rob is his father (see here

Has had prominent guest appearances in two Guided by Voices music

Some of the actor's work's associated tropes: