Series / The King of Queens 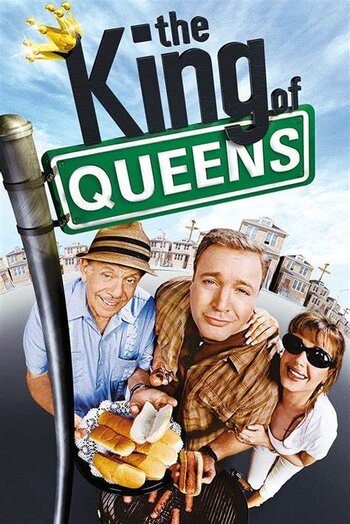 "My eyes are gettin' weary
My back is gettin' tight
I'm sittin' here in traffic on the Queensboro Bridge tonight
But I don't care 'cause all I wanna do
Is cash my check and drive right home to you
'Cause baby, all my life I will be drivin' home to you!"
— The theme song, sung by Billy Vera & the Beaters
Advertisement:

A well-known CBS sitcom running from 1998 to 2007. It focuses on the life of Doug Heffernan (Kevin James), a fat but jovial IPS driver, and his wife, Carrie Heffernan (Leah Remini), nee Spooner. Most of the time, Doug tries to live a hard-working but relaxed and diet-free life, which is complicated by the zany schemes of Arthur Spooner (Jerry Stiller), Carrie's father, who lives in their basement.

Doug has quite the circle of friends. His best friend is the black family man, Deacon Palmer. Others include Richie Ianucchi, a ladies' man who nicknames Doug as "Moose", Doug's awkward cousin Danny (who is played by Gary Valentine, James' brother in real life), and Spence Olchin (Patton Oswalt), a nerd of sorts who isn't the Butt-Monkey of the group so much as the omega wolf. While not part of the circle, another friend is the local dog-walker Holly, who, in spite of her drinking and trouble finding a date, does a good job of putting up with Arthur's weirdness.

Most viewers point out The King of Queens for its prominent case of Big Guy Hot Wife. What makes the show unique, though, is that Doug and Carrie share other attributes that show opposites attracting. For example, Doug is a nice and friendly guy and is quite content with his job as an IPS driver, whereas Carrie sometimes fantasizes about the directions her life could have taken and has a somewhat grayer moral compass. Another example is that Doug is a hard worker, but he likes to play hard as well, whereas Carrie is a card-carrying workaholic. Had a Spiritual Successor of sorts in the second and final season of Kevin Can Wait with Kevin James and Leah Remini at the starring roles.