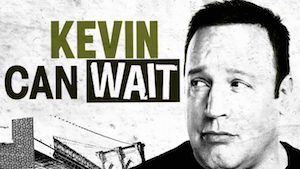 Kevin Can Wait is an American sitcom television series starring Kevin James. The series premiered on September 19, 2016. The series marked James' second starring role in a CBS sitcom, after The King of Queens, which ran from 1998 until 2007.

The series begins with James starring as a recently retired Nassau County, New York police officer and father of three, married to Donna (Erinn Hayes). For season two, the character of Donna died, and the series' new female lead is Vanessa Cellucci (Leah Remini), Kevin's former rival on the force and his new boss at a security company. While the first season focuses on Kevin's personal life, the second concerns his new profession, his relationship with Vanessa, and his adjustment to life as a single parent.

After the Season 2 finale, the show was cancelled by CBS.

The show is pretty much only known for its infamous retooling between seasons, which was widely criticized and even inspired the AMC series Kevin Can F**k Himself. While not a direct parody, the combination of its premise, title, and execution does little to hide the Take That! aimed this show's way.