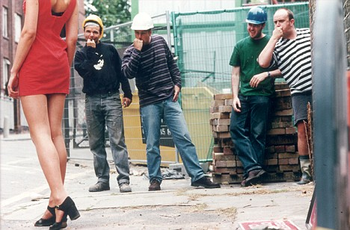 "Why do builders think that works? As if the woman's going to turn around and be like, "Oh! My future lies with him!! And his huge, rotund belly!"?"
— Lee Evans
Advertisement:

A scene used countless times in media: some construction workers are on their lunch break when all of a sudden a sexy lady struts by the site. Cue the Wolf Whistles and sexual comments, which will way more often result in disgust or annoyance rather than delight from the woman. Very often Played for Laughs since it's a quite easy way to incur some situational comedy.

It's commonly subverted nowadays by having the workers comment on something else entirely.

This behavior is sadly Truth in Television (and in some jurisdictions is considered as a form of sexual harassment or even assault).

Hey Troper, how 'bout some examples with that description!