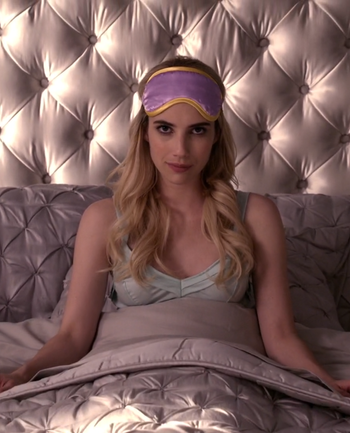 She woke up like this.
"My hair and makeup are impervious to anything short of thermonuclear armageddon."
— Annika-709, Plan 7 of 9 from Outer Space
Advertisement:

When a TV character wakes up in the morning, he or she is almost always impeccably groomed. You never see bed-head, stubbly beards, or crusty eyes unless it's a story point, and even then it's usually just to emphasize either a late night drinking with friends, or a new baby that's making a lot of demands. But very often, women arise from eight hours' sleep with perfect makeup, without even a small smudge. In short, Not a Morning Person definitely does not apply.

Often, this trope extends to characters emerging from a shower, swimming pool or the sea... or even to women who have no access to cosmetics whatsoever.

This has become a Discredited Trope, but it's still played straight in far too many shows. In animation this is usually due to a Lazy Artist's Limited Wardrobe extending to hair and makeup. Compare Morning Routine, where adding makeup/beautifying oneself will be shown. Subtrope of Beauty Is Never Tarnished.