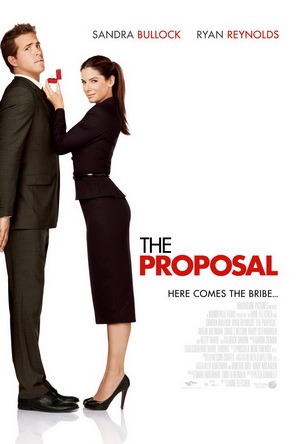 Margaret Tate (Bullock) is a domineering (and very bitchy) Canadian woman who works as an executive editor for a publishing company based in New York City, and treats pretty much everyone around her like crap, particularly her assistant, Andrew Paxton (Reynolds). Eventually, Margaret learns that she's in danger of being deported back to Canada due to violating the terms of her work visa.

To fix this, Margaret lies by claiming that she's engaged to get married to Andrew and that the two of them are planning on flying out to Alaska for his grandmother's 90th-brithday to tell the rest of his family. Andrew, of course, vehemently tries backing out of the plan, but Margaret insists that they'll be married for a short while and then get a divorce—Andrew ultimately agrees to it after he makes her promise to publish his book and promote him.

The two fly out to Alaska and Margaret meets Andrew's family—over the course of their time in Alaska, the two slowly get to know each better and ultimately end up falling in love (for real).

Tropes included in this movie: