Film / Jumanji: Welcome to the Jungle 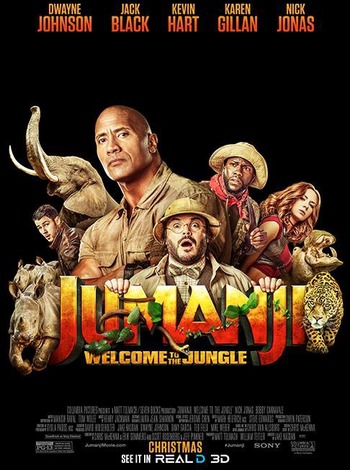 You don't just play Jumanji. Jumanji plays you.
"A game for those who seek to find a way to leave their world behind."
— Spencer
Advertisement:

Four Ordinary High School Students receive detention in the form of cleaning out a basement that has laid untouched since The '90s; among the detritus they find a vintage gaming console... that plays a not-so-vintage game. Each selects a character, and upon hitting "start", they find themselves Trapped in Another World, playing The Game Come to Life — and not the game they expected, either:

Together, the four heroes must recover a mysterious jewel called the "Jaguar's Eye" and return it to its rightful place on a jaguar statue to complete the game before they lose all three of their lives. If that wasn't enough, evil mercenary Russel Van Pelt plans to get the jewel for himself, and if he succeeds before the heroes do, then it's game over.

A direct sequel called Jumanji: The Next Level was released on December 13, 2019.

Jumanji: Welcome to the Jungle provides examples of:

♫ Welcome to the jungle, we got fun and games
We got everything you want, honey, we know the names
We are the people that can find whatever you may need
If you got the money, honey, we got your disease... ♫
Feedback