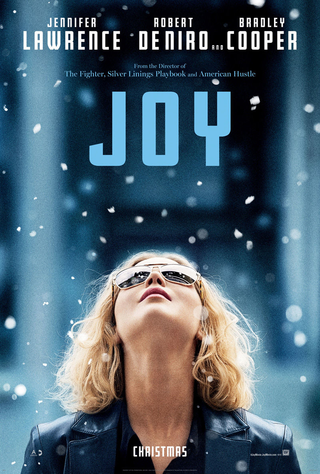 Joy Mangano (Lawrence) is a creative—but overworked—divorced mother of two, living with her agoraphobic mother (Madsen), doting grandmother (Ladd), and deadbeat ex-husband (Ramirez) on Long Island, New York. When her father (De Niro) begins dating a widowed entrepreneur (Rossellini), Joy gets the idea to develop a self-wringing mop she dubs the 'Miracle Mop."

With the help of the extended Mangano clan and financing from her father's new flame, Joy's new invention catches the eye of a QVC executive (Cooper), who quickly helps it become one of the hottest new items on the aforementioned home shopping network.

Despite her much-earned success, Joy soon discovers the business world is more cutthroat than she first thought...

Joy is notable for being the third consecutive feature film directed by O'Russell to star both Lawrence and Cooper (the latter albeit in a small supporting role), and second overall to feature De Niro. Lawrence won a Golden Globe award for Best Actress in a Musical or Comedy, and was nominated for Best Actress at the 2016 Academy Awards.