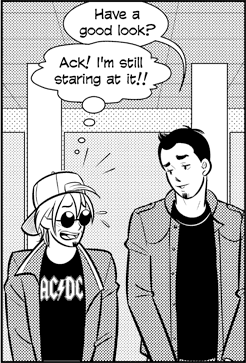 The disguised Ruby doesn't know the rules, but should be able to guess.
Urinal neighbor: I'm a big fan of the work.
Tycho: Like, here? In the urinal?
Urinal neighbor: No. Like, the comics and stuff.
Tycho: Oh! Thanks. Thank you.
[later]
Tycho: It's like, there are rules! You're supposed to pee in reverent silence, like monks.
Gabe: Tell me about it. That's why I use the ladies' room.
— Penny Arcade, "Protocol"

While the Wondrous Ladies Room may be a place for chatting, primping, and various Women's Mysteries, the men's restroom is a place dedicated to speed and efficiency. When using the restroom, men must observe certain unspoken guidelines that dictate their behavior therein and speed up the process of using the lavatory. Except in extenuating circumstances, such as overcrowding, any breach of these guidelines is discouraged and can lead to some awkward and embarrassing situations.

Whenever Male Restroom Etiquette is brought up in media, it is usually Played for Laughs as we watch some poor soul try to use the restroom while another man shows complete disregard for the above rules. And while many men can attest that these rules are indeed Truth in Television, most know that a breach of these rules is not so awkward as some make it out to be. Contrast The Can Kicked Him (or its subtrope Camping a Crapper), the ultimate breach of etiquette.

Example of:
Black Is Bigger in Bed