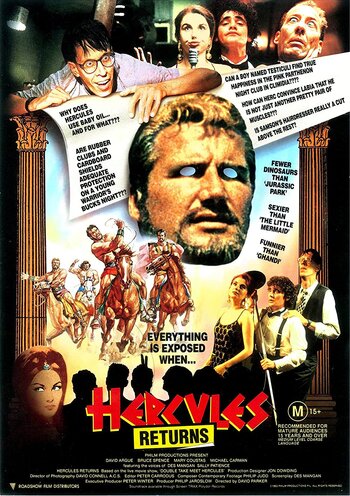 Film buff Brad McBain is a hapless employee of Australia's largest cinema corporation. When his boss Sir Michael Kent unveils his plan for a huge multiplex showing low-brow movies in overcrowded theatres with minimal staff and price-gouging concession stands, McBain decides to quit his job and renovate the disused Picture Palace with the help of projectionist Sprocket so they can show movies like they did back in the good old days. For a Publicity Stunt their publicist Lisa suggests that for the red carpet premiere they show the last movie playing at the Picture Palace when it was shut down, the Italian Sword and Sandal movie Herculesnote actually Samson and His Mighty Challenge.

Unfortunately on opening night they discover the movie they've been sent is (thanks to Kent's machinations) the undubbed Italian version. There's only one thing to do: Gag Dub the entire movie as it's being projected on screen!