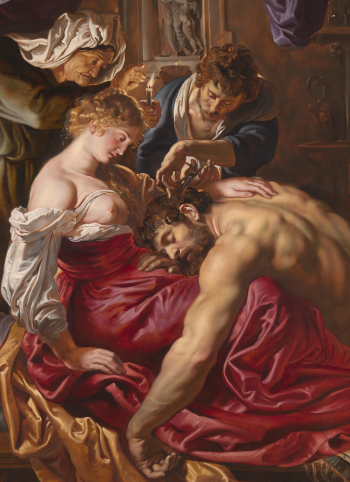 The story of Samson, better known as "Samson and Delilah", can be found in the biblical Book of Judges. Samson was one of the "judges" of Israel and ruled during Israel's subjugation by the Philistines.

Samson is noted for having Super Strength, a blessing of being chosen by God to be the one to free Israel from the Philistines. He's also the most unlikely person for the job, being something of a trickster and a skirt chaser. He also has a habit of choosing wives who tend to screw him over. In the end he sacrifices himself and takes everybody and everything with him. This is why Israel's massive retaliation plan in case of near military defeat is called The Samson Option.

This story has been used several times in fiction since then, inspiring paintings by Rembrandt van Rijn and Peter Paul Rubens, having Samson squared off against Superman in the Silver Ages and even having his own title (see Mighty Samson) highlighting him as a likely inspiration for and Ur-Example of the modern superhero. Samson has a surprising amount in common with early Superman (superstrength, likes to screw with people, takes on corrupt government/aristocracy/business).

His life's story has been the subject of one Cecil B. DeMille theatrical film, 1949's Samson and Delilah starring Victor Mature and Hedy Lamarr in the title roles, which was remade twice on TV, the first in 1984 (with Mature doing a cameo as Samson's father) and another in 1996 (which featured Dennis Hopper, Michael Gambon and Elizabeth Hurley); Delilah tends to get more screen time in the films than she does in the original story. There's also an operatic version by French composer Camille Saint-Saëns (the source of the popular concert piece "Bacchanal"), and an oratorio by George Frederic Handel, based on the dramatic poem "Samson Agonistes" by John Milton.

It should be noted that because of the aforementioned character traits of super strength, trickery, and skirt chasing, as well as the plot point of being crippled and betrayed by a woman he loved, many mythologists believe that Samson was a Jewish equivalent to the Greek hero Heracles (Roman version: Hercules), in the tradition of the Near Eastern folk hero.

Not to be confused with the talking dog from Flemish television.

Tropes specific to the 1949 film