I Resemble That Remark! 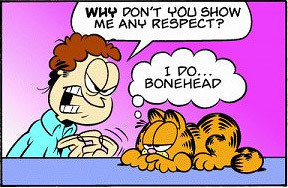 What did you expect when you asked a cat to give you some respect?
"It's worth noting that [Chris Johnson]'s first response to the news site that labeled him a pimp was to threaten to 'come down there and slap the shit out everyone I see,' which we admit doesn't at all sound like something a pimp would say."
— Cracked, "7 Ruthless Criminals Who Turned Good When Nobody Was Looking"

Alice makes a criticism of Bob. Bob denies it, but does so in a way that validates the statement. This makes it a form of Hypocritical Humor.

Perhaps the most common criticism for this is being violent or short-tempered, perhaps because it allows a response of comedic violence, but plenty of other criticisms are possible, including stupidity ("No I aren't!"), vulgarity ("Fuck you!"), inattentiveness ("No, I'm not—What are we talking about again?"), vanity ("Oh thanks, you noticed!"), being pretentious ("Moi?"), and immaturity (throwing a tantrum).

See also Description Cut for the inverse of this. Compare Not Helping Your Case, I Take Offense to That Last One!, I Would Say If I Could Say, Oblivious Mockery, Oblivious to His Own Description, Immediate Self-Contradiction, Mirror Character, and contrast with Insult Backfire. The line itself (which is often attributed to Groucho Marx) is, of course, a play on "I resent that remark."