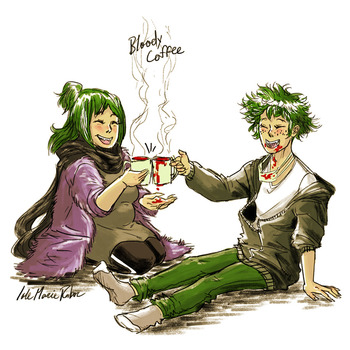 So here's the thing. Midoriya Izuku and his mother, Midoriya Inko, are not human. They're what popular culture would call Vampires.

is a My Hero Academia fanfic by Unoutan

Midoriya Izuku was born a vampire to his also vampire mother Midoriya Inko. He and his mother live alongside humanity as Izuku grows up and attends school with the help of Inko's friend, Sumi.

Unfortunately unlike the majority of humanity, vampires don't get powers until they reach their 100th birthday if they're lucky much to Izuku's heartbreak. Regardless of the human kids' cruelty to him, Izuku believes that he can become a hero!

Bloodstained Heroes of Humanity contains the examples of the following: