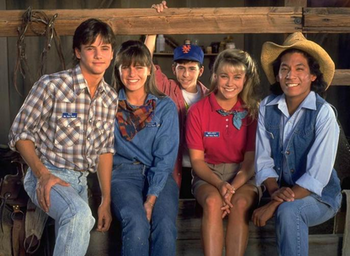 Ted, Brad, Buddy, Melody, and Danny.
Better watch out for those man-eating jackrabbits... and that killer cacti!
Advertisement:

Hey, Dude! was a sitcom that aired on Nickelodeon from 1989 to 1991. It followed the misadventures of the teenage summer help at the Bar None Ranch in Arizona, as well as its owner, the rather clueless Benjamin Ernst. Mr. Ernst, after years of being a nebbish pencil-pusher, gets the urge to be a cowboy; so he buys the Bar None and becomes its manager. Since his only qualifications (if you can call them qualifications) are his enthusiasm for bolo ties and ten-gallon hats, he's quickly in over his head. Consequently, he has little time to supervise the young staff, who leap on the opportunity to romance each other and concoct schemes... in the most wholesome possible way, of course. The staff are:

Although it didn't have a Laugh Track, Hey, Dude managed to use many well-known sitcom tropes in the short time that it was on. Its first season was released on DVD on July 19th, 2011