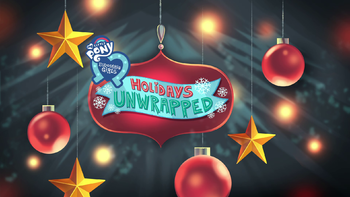 The series follows the exploits of the Equestria Girls during the holiday season. Unlike past specials which followed a continuous narrative during their runtime, Holidays Unwrapped is a series of six independent shorts.

With Word of God from DHX being that they produced no further content after Season 2 of the online series, this is the final Equestria Girls special to be made by them.

The online version can be found below:

open/close all folders
General
"Blizzard or Bust"
After falling asleep during an all-night study session, Rainbow Dash convinces the Equestria Girls to fake a snow day so they'll have more time to study.
"Saving Pinkie's Pie"
Pinkie is determined to make a soufflé for Rarity that doesn't collapse before she gets it to her, but she and Sunset Shimmer have to brave a snowball warzone to get there.
Advertisement:
"The Cider Louse Fools"
The Apples are joined by Twilight, who has a plan to help them keep the Flim-Flam brothers from ruining their cider party.
"Winter Break-In"
The Equestria Girls plan to give toys to kids at the mall, but they need to get the key to Sunset's storage locker from school, which is closed for winter break.
"Dashing Through the Mall"
Realizing that she's forgotten to get Fluttershy a gift, Rainbow Dash desperately searches the mall for a last-minute idea.
"O Come, All Ye Squashful"
Applejack ropes her friends into taking an embarrassing cornucopia picture, so Rarity resolves to make the best of a bad situation.