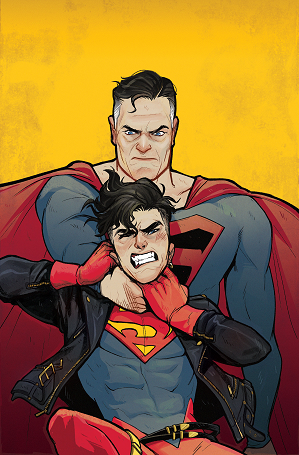 "...You and I have so much in common, Uncle Pete. The Super Speed, the brooding bad-boy thing, the weird white-headedness... though, I suppose it must be a blow to the old ego, knowing there's a version of you out there that's younger, better-looking, and faster."
— Speed to Quicksilver, Avengers: The Children's Crusade
Advertisement:

The Junior Counterpart is a character that serves as a younger Mirror Character to an older character. A character of this sort is often present to have similar origins, appearance, or personality to the older character, but is either more idealistic, naive, or reckless than the older character and always less experienced. It's far more likely that the junior is the protagonist as he is most often shown to be the underdog, with the senior functioning as a Decoy Protagonist.

The junior is most often presented as being a student or younger relative of the senior, but not always. Sometimes, the junior becomes the sidekick of the senior, other times it may be showing how History Repeats.

If a work follows the junior's Character Development, he most likely develops the same characterization as the senior if he doesn't already have it from the beginning.

Often generates a "You remind me of me" statement and might even carry a Weapon Jr.. If the junior is a descendant of the senior, overlaps with Generation Xerox. Compare Spin-Off Babies and Legacy Character.