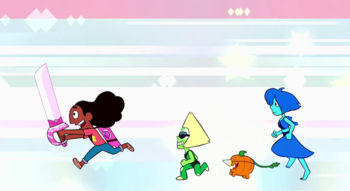 Go! New Crystal Gems!
Connie shows up at the Beach House at the same time Peridot and Lapis Lazuli do, each having received a request from Steven and Garnet, respectively, to watch over Beach City while they are on their mission to save Greg from Blue Diamond's human zoo.
Advertisement:

There's a certain amount of resentful complaining since neither Connie nor the Barn Gems had been aware of another request to protect Beach City. They eventually settle on becoming the new Crystal Gems, each taking the role of one of the original Crystal Gems. Peridot dons a pair of shades and declares herself Garnet; she is taciturn and gestures a lot. She declares Lapis Lazuli is Amethyst; Lapis throws her hair over one eye, and begins belching and laughing a lot. Connie she calls Steven. Connie changes into Steven's shirt and jeans. Pumpkin, by default, ends up as Pearl once a party hat to simulate her pointed nose is placed on.

Beach City isn't really very busy in a way that requires the Gems to do much. It hasn't been since the events of "Joy Ride" for the most part. Lacking anything else heroic or protective to do, they decide to run Greg's car wash in his absence.

Peridot and Lapis make an excellent car washing team. Peridot's metal manipulation ability has gotten strong enough for her to lift a car several feet in the air, and Lapis Lazuli can give the car a good external wash with her water powers. Pumpkin and Connie finish off the wash by toweling a car off and waxing it so it shines.

Word soon spreads and the residents of Beach City all want their cars washed in a new way. The New Crystal Gems attempt to keep washing cars, but it goes wrong. Lapis becomes bored of being "Amethyst", and wants to be Garnet for a bit. The conflict eventually results in Peridot throwing Yellowtail's car through Greg's sign. They sheepishly agree to pay for the damages.

Connie has to point out that although they're thousands of years old, they're acting like children. This prompts Lapis to compliment her that she makes a pretty good Steven (after having earlier said Connie was nothing of the kind).

When Steven returns, he checks to see how good a job the substitute Gems have done. They admit they in-fought and made a mess, but wanted to make it up to Greg by doing a new sign for him.