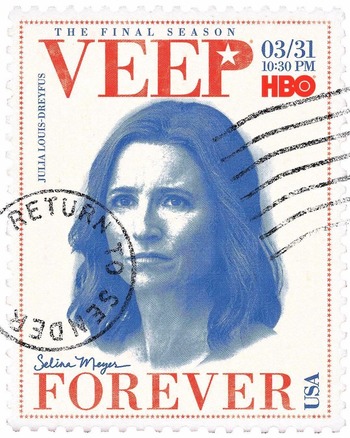 Our land is her land.
"I'm the Vice President of the United States, you stupid little fuckers! These people should be begging me! That door should be half its height so people can only approach me in my office on their goddamn motherfucking knees!"
— Selina Meyer, VP
Advertisement:

Veep is an HBO satirical dark comedy about the various dysfunctional staffers in the office of ineffectual Vice President of the United States Selina Meyer, played by Julia Louis-Dreyfus (of Seinfeld and The New Adventures of Old Christine fame). Developed by Armando Iannucci, it is a long-awaited (five years!) American adaptation of The Thick of It and a Spiritual Successor to the American side of In the Loop. It keeps most of the biting satire of the originals, and although the swearing level is about the same, it would appear that American politicians and staffers prefer sarcasm to straight-up bollocking.