Theatre / Spider-Man: Turn Off the Dark 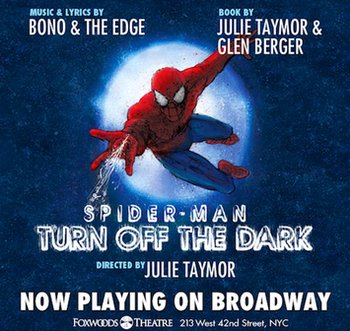 Spider-Man: Turn Off the Dark is a Broadway musical based on the Marvel Comics superhero. Directed by Julie Taymor with the score and lyrics by Bono and the Edge of U2, as of this writing, it is the single most expensive Broadway musical ever produced, costing about seventy-five million dollars. note  The average budget for a Broadway show is about $2-10 million. TOTD would've had to play to nothing but packed houses for two years straight just to break even.

Storywise, the final product is largely based on the first two Sam Raimi films, with the myth of Arachne and the Maximum Carnage story arc added into the mix. Peter Parker becomes Spider-Man and, after losing his Uncle Ben, uses his newfound powers to fight crime under the guidance of the mythical Arachne. Meanwhile, the genetic scientist Norman Osborn becomes the Green Goblin after an experiment gone wrong. Desiring to forcibly mutate the world, he creates a supervillain "family" called the Sinister Six who must be stopped. The first version had a heavy focus on Arachne in Act II, making her the main villain who wove illusions into Peter's mind in a bid to either win his love or have him kill her.

The musical is best known for its very, very Troubled Production. Several actors were injured during rehearsals and the preview period, falling while performing the show's elaborate aerial stunts, causing many to joke that it should have been called Spider-Man: Notify Next of Kin. The script underwent Retooling more than once, and Julie Taymor was fired, during this time. The whopping one hundred and eighty-two performances, spanning 2010-2011, before the show officially debuted was the longest preview period in Broadway history. The production closed in January 2014; while it looks to be one of the biggest flops in Broadway history with its backers looking at losses of $60 million, the producers intend to stage it elsewhere in years to come. Las Vegas and a touring production were also considered, though nothing has come of it yet.

Spider-Man: Turn Off the Dark provides examples of the following tropes:

"A Freak Like Me Needs Company" features the Green Goblin initing the Sinister Six.

"A Freak Like Me Needs Company" features the Green Goblin initing the Sinister Six.