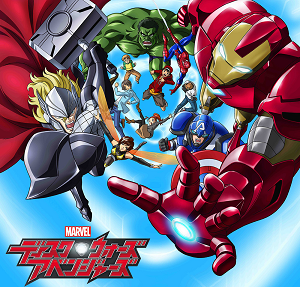 The series is the third collaboration between Marvel and the Toei Company after their Spider-Man Tokusatsu series and The Tomb of Dracula Made-for-TV Movie. It is also Marvel's third anime collaboration after the above-mentioned Dracula film and the Marvel Anime project done with Madhouse. Additionally, it is the fourth Avengers Animated Adaptation after The Avengers: United They Stand, The Avengers: Earth's Mightiest Heroes!, and Avengers Assemble.

Loki quickly crashes the party and manages to get the upper hand when he takes Pepper Potts hostage. He promptly steals the disks for himself and imprisons almost all of the heroes present, hoping to use the Disk technology to force them to work for him. However, to command the disks, one has to have a "bio code" installed in them, and an odd chain of events leads to Akira and the others receiving the bio codes instead of Loki. Now, with Spider-Man being one the few superheroes left completely free and Iron Man only able to function with Akira's help, it's up to the kids to find the rest of the heroes in the world until they can be freed.

Though otherwise not related, July 22, 2017, saw the premiere of a new Marvel anime collaboration, called Marvel Future Avengers, that once again features the Avengers (same line-up as Disk Wars) teaming up with young, heroic teenagers who are the viewpoint protagonists, this time as mentors and with the teens having powers of their own. The series currently airs on Japanese satellite channel DLife.