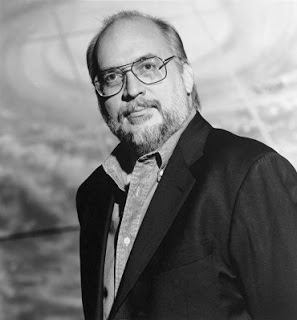 Straczynski on the set of Babylon 5's War Room circa 1996.
"The universe considers me its personal cat toy. Do you have ANY idea what it's like to go through life covered in cosmic cat spit?"
— JMS in IRC, 1/22/97
Advertisement:

Joseph Michael Straczynski (born July 17, 1954) is a writer in several genres and mediums, often known online as JMS. He first became well known in SF circles in the 1990s for creating the cult Space Opera Babylon 5. Later major works included the screenplay for the Clint Eastwood film Changeling, the Netflix series Sense8, and an earlier long run on Marvel's Amazing Spider-Man. He is known for being a fast writer. His B5 scripts alone run to ten thick volumes, and he wrote a new, camera-ready shooting script for the film Ninja Assassin from start to finish in 53 hours.

B5 was a long-time personal project for Straczynski, to the point that he wrote most of the five-year series single-handedly. To produce it, he endured budget headaches, unexpected actor illness and departures, multiple near-cancellations, an ongoing feud with Paramount over similarities between his show and Star Trek: Deep Space Nine, and much more.

Most of this was extensively documented. Straczynski was active on Usenet and CompuServe to a degree almost unheard of for a showrunner. He has written at great length about the show since it went off the air. Babylon 5 was not a major success and was overshadowed by Deep Space Nine, but it proved influential. B5's use of early CGI and season-long arcs were revolutionary at the time and paved the way for shows like Battle Star Galactica 2003 and later prestige television.

B5 came to a somewhat unsatisfactory end, due to the series being cancelled, hastily concluded, then Un-Cancelled — whereupon the creators had to find a way to extend the story before airing the actual conclusion. Later, Straczynski tried to realize the grander ambitions of B5 with the Aftershow Crusade, but it crashed and burned due to network bickering. Straczynski again found himself fighting with studio execs and producers while running Jeremiah. He became persona non grata in television for a while. He'd done everything to earn their ire: Retconning Janine's makeover in Ghostbusters as the result of spiritual possession. Killing off network-mandated additions to his cast. Tossing B5-trademarked teddy bears out of airlocks to protest attempts to merchandise his show. (That is not a joke. This actually closed out an episode.) Concocting loopholes in stories he was forced to write so that they could be overwritten later.

After Jeremiah ended, Straczynski began writing for comic books. For much of the 2000s, Straczynski had an exclusive contract at Marvel, where he wrote Amazing Spider-Man, The Mighty Thor, and Silver Surfer: Requiem among others. Later, he went to work for DC, where he wrote the well-received Superman: Earth One.

Mostly, he wrote movies. Straczynski became a well-known screenwriter by selling his original screenplay for Changeling. Not all of Straczynski's scripts were produced - for example, Straczynski wrote an adaptation of the E.E. "Doc" Smith Lensman series that he says is still on Ron Howard's desk. However, he has story credit or screenplay credit on four produced movies and has written scripts for several more. According to his autobiography, he sold a still-unproduced original screenplay for over one million US dollars.

Straczynski's most recent major work was the Netflix series Sense8 with the Wachowskis. He has also moved into writing novels with the 2021 work Together We Will Go. He is Harlan Ellison's literary executor and says he has sent a version of Ellison's decades-long project The Last Dangerous Visions to a publisher.

His first name is Joseph, so his friends call him Joe; he has stated that "Straczynski" is a name which would "frighten cats". Professionally, he goes by J. Michael so as to allow people to slowly learn how to pronounce "Straczynski." First word: one letter, easy; second word: Michael, two syllables but easy enough; and then...the leap! Fans generally know and refer to him just by his initials, which is how he signs his emails and Usenet posts. For the record, his last name is supposed to be pronounced "Strat-itch-in-sky", from the Polish name Straczyński; his family used to spell it with an "ń" rather than "n", producing a sound related to that of "ñ" (as in Español).

Straczynski spent some time in a Cult while in college, and was once mugged and left near-death. Both experiences heavily inform his stories. In 2019 he published his autobiography Becoming Superman, revealing for the first time the abuse he suffered from his father, a former Nazi who forced JMS to wear his old uniform in an attempt to toughen him up. In retrospect, this also colors a lot of his work. Because of his father's refusal to let him see anything resembling a competent doctor (or spend any money for one), some of his quirks went undetected for a long time. Joe describes putting on a classmate's glasses and discovering that 20/20 vision is a thing which exists. Later self-diagnoses included Asperger's Syndrome and PTSD.

He shares a birthday with David Hasselhoff and Phyllis Diller, as well as an exact birthdate with German Chancellor Angela Merkel.