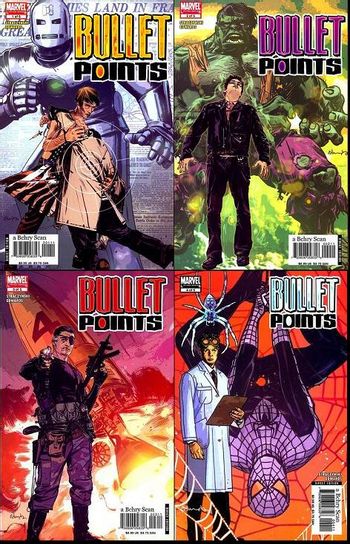 Pictured: Steve Rogers as Iron Man, Peter Parker as Hulk, Reed Richards as the head of S.H.I.E.L.D. and Bruce Banner as Spider-Man.
"This is a bullet, and this is what it does."
Advertisement:

Bullet Points is what can be considered the ultimate What If? story in the greater Marvel multiverse — specifically, "What could possibly go wrong by pulling a bullet 24 hours back in time?"

The answer is, "there are changes by the bucketload". The series lasted for 5 issues (January-May, 2007).

Simply put, instead of shooting Professor Abraham Erskine on the 9th of December in 1940, that Nazi spy shot him one day earlier. Cut to an airport, 8th of December: just when Erskine is about to take a plane in order to test the Super Soldier serum, the spy shoots him, killing not only the prof., but also another soldier in the process: Benjamin Parker.

Since Erskine had the formula in his head instead of writing it down — in order to prevent any spies from taking advantage of it — Captain America never came to be. A discouraged Steve Rogers kept waiting and waiting until he was the sole man remaining in the hall. So, the army noticed such patriotism and thought it was worth something, despite Rogers' weak body. Then they unveiled plan B — a robotic and then-rudimentary armor — that could only be worn by someone as thin as Steve Rogers. That was given the In-Series Nickname of "Iron Man". There was a downside to that — to prevent the armor from getting handled by the wrong hands, whoever was given the suit would also have to be linked to an electric device who worked as a sort-of-key for the armor. The device had to be installed within the user's heart. And the future Iron Man needed to be awake during the operation. Despite all of the crap to deal with, the patriotic Steve Rogers accepted anyway.

However, the bullet also made other changes. Without a paternal figure such as Uncle Ben, Peter Parker became somewhat of an Expy of James Dean's character in Rebel Without a Cause, and was wandering a wasteland alongside other fellow bullies. Pity his 4x4 ran out of fuel, of all places, where a Gamma Bomb was also going to be tested.

Back to Steve Rogers. The American hero Iron Man needed a technician to work on his suit: said technician wasn't anybody else than, you guessed it, Reed Richards — and as a result, he had to postpone his space travel. After gaining fame as the man who worked on such an amazing product of technology as Iron Man's suit, when Steve Rogers finally told Reed to focus on his own career, he finally accepted to travel alongside Johnny Storm, his sister Susan and Benjamin Grimm — but his fame made him an easy target. A man sabotaged the shuttle by setting a bomb on it and as a result, the shuttle fell down — with Richards as the sole survivor, and even then, at the cost of a missing eye. After donning an Eyepatch of Power and a lot of angst over the loss of his friends, Reed Took a Level in Badass when given the opportunity of disappearing from the face of the planet — by working for S.H.I.E.L.D..

When the aforementioned Gamma Bomb went kaboom, every life form (excluding Parker, because... uh... yeah) that survived the explosion was studied by Professor Bruce Banner. Including a spider, that, take a wild guess, ended up biting him.

We won't spoil any more of this miniseries — you only need to know that J. Michael Straczynski, famous for his run on Spidey, wrote it with a rather brilliant premise: "A bullet can spread lives as if they were balls on a pool."

See The Nail for this series' DC universe counterpart and Powerless for a series that similarly turns the Marvel Universe on its head and as such, for example, in Italy got reprinted together with Bullet Points in a single book. The concept of Steve Rogers becoming Iron Man was later used in the first episode of the Marvel Cinematic Universe series What If…?, which showed an alternate universe where Peggy Carter was given the super-soldier serum.