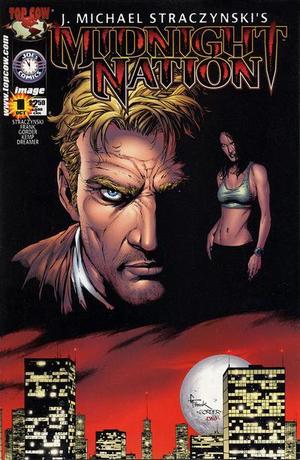 "Okay, let's run through it again. See if it makes any more sense this time than the last time. I've been attacked. I've had my soul stolen. I've slipped through a metaphorical crack in the sidewalk and ended up in the place of abandoned objects and dispossessed people. And if I don't get my soul back in less than a year, I'll end up dead or one of the things that prowl this side of the metaphor. Any way you slice it, it's been a hell of a week."
— David Grey
Advertisement:

Midnight Nation is a religious-themed twelve-issue American comic book limited series, created by J. Michael Straczynski (he of Babylon 5 fame) and published from 2000 to 2002 by Top Cow Productions under their now defunct Joe's Comics imprint. It is about a man who is killed, in a sense, and is on a journey to save his soul.

Detective David Grey is a dedicated, workaholic member of the LAPD. He's often successful too, in part because of the fact that he has practically nothing else in his life besides police work, in part because he's one of the few members of the force that actually cares about what's going on, even if the victim he is investigating is black, a drug dealer, or whatever. On his latest case he gets some mysterious hints that the case is more than it appears to be, and that the victim, Toby, was killed by some mystery faction that spooks even the veteran street criminals.

Within hours the informant has been brutally murdered, leaving only his initial hints to go on. From those hints David manages to track down Arlan Jaeker, a career criminal, and takes a police unit to arrest him. He finds Jaeker surrounded by the demonic, bloodthirsty entities known as the Walkers, who literally tear the police unit with David apart. David manages to shoot Jaeker, but is helpless against the Walkers themselves. Then the leader of the Walkers does something to David, and he begins to pass out...

... then wakes up in a strange limbo world, where he can see people as ghostly figures, but they cannot see him and pass right through him. At first, the only person he finds that can see him is a tall, strange woman who calls herself Laurel, who says she will be his guide, either until the Walkers find him and kill him, or until he turns into one of them, in which case Laurel will kill him. David soon finds that the only things he can interact with successfully are things which have been lost, abandoned, broken, or thrown away, and similarly the only people who can talk to or see him are the same way.

Eventually, Laurel tells David that his soul was taken by the leader of the Walkers, and at most David has less than a year before the loss of it turns him into one of the Walkers. So with Laurel leading the way, David sets out on a cross-America trip to New York to reclaim his soul while slowly learning more about the Walkers (and fighting them at every step), lost things and people, and the nature of the Balance Between Good and Evil in this universe. Not everything is as simple as it seems, however, and reclaiming his soul will be more complicated than simply walking to New York and taking it back.