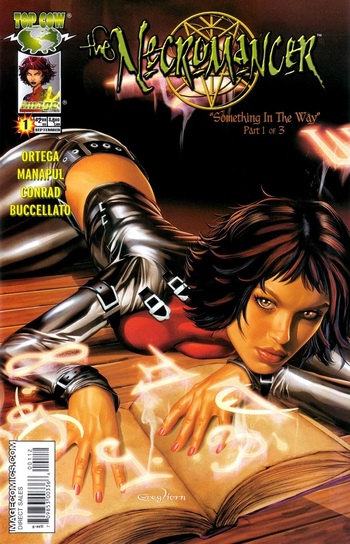 "A month ago, I lived in Colorado Springs. A nice, clean, all-American city in the nation's heartland. Height limits on the buildings, Rocky Mountain views, home of the Air Force Academy and NORAD. The place bleeds red, white and blue. And in so many ways, my life did too. Like a perfect slice of Americana pie. I had a mother, a father, tons of friends... then I killed them all. Everyone I loved is dead. And I'm still alive. But it'll all be over soon..."
— Abigail van Alstine
Advertisement:

The Necromancer is a six-issue comic book limited series published by Image Comics under their Top Cow imprint from September 2005 to July 2006. The comic was written by science fiction author and comic writer Joshua Ortega, with art on the first series by Francis Manapul. It has been described by some as a "dark version of Buffy the Vampire Slayer."

Abigail van Alstine lives a perfect life. She is a cheerleader and the most popular girl in school until she experiments with magic spells and accidentally kills her friends and family. Only her new mentor Locke can now help her.

Abigail is thrust into the world of magic and soon ensnared in a larger conflict between the Church of Mali, an ancient demon, the Dark Agents, and the mysterious Hierarchy.

No connection to the tv-show of the same name.

The Necromancer provides examples of: