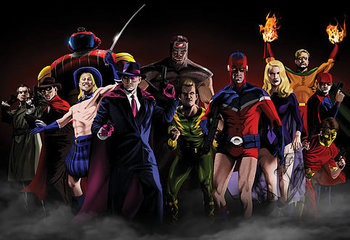 The Twelve is a twelve-issue miniseries of comics written by J. Michael Straczynski and set in the Marvel Universe, featuring the titular twelve, a group of a dozen "mystery men" from The Golden Age of Comic Books, brought back into the strange new world of modern Marvel Earth, shortly after the events of Civil War. It makes use of twelve updated, reimagined Golden Age characters that Marvel wrote about in its days as Timely Comics.

During The Battle of Berlin, various Allied mystery men are sent into the city as part of the final push. One of the impromptu squads of heroes was made of twelve individuals:

The Twelve make their way deep into Berlin, but fall for a Nazi ambush where they are gassed and sealed in cryogenic suspension pods. The Nazis intend to keep them for subsequent experiments in creating their own superhumans, but Berlin falls soon after, and all those who were aware of the capture of the Twelve perish, either during the fighting or in the Soviet prison camps afterward.

Sixty years later, the Twelve are discovered and revived, slowly realizing that they have been brought into an alien new future. Each attempts to adjust to their new life, but not with too much success. Mister E retires and eventually reunites with his family, who had long shunned him for the shunning of his Jewish roots. Blue Blade attempts to become a TV star, reviving an old-fashioned cabaret-style comedy act. The Laughing Mask is sent to jail when forensics confirm him to be the murderer of a crime boss in the 1940s. Electro no longer functions and is returned to the descendants of his creator. Excello goes into solitude, as the modern world is far too much for his psychic senses to cope with. Phantom Reporter gets a job writing a column for the Daily Bugle. Rockman remains in the mansion that the Twelve were given to recuperate in, trying to make contact with his kingdom. Black Widow leaves to resume her independent crusade, as does the Witness, and Dynamic Man, Captain Wonder, and Fiery Mask all take the offered job.

And then Blue Blade is murdered, and things start to get strange...

The Twelve provides examples of: