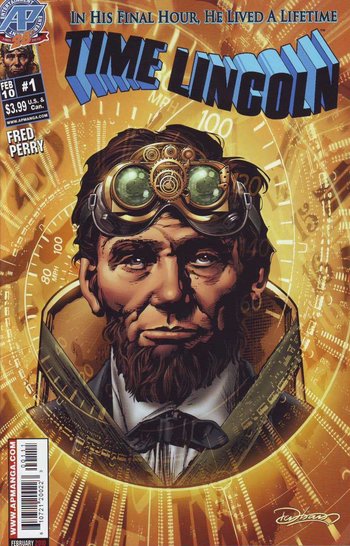 What happens when the Great Emancipator is suddenly freed from the bonds of time to right wrongs throughout history? Taken out of time on the night of his assassination, Abraham Lincoln learns all of history is threatened by the Tyrant of Time, Void Stalin—and that he is (or will be) Stalin's arch enemy! Faced with fiends like Mephitler and Apocalypse Mao, Lincoln joins with such historic heroes as Isaac Newton, Albert Einstein, Ben Franklin and George Washington Carver to thwart the forces of evil in the past, present and future. In his final hour, he lived a lifetime!

Time Lincoln is a one-shot graphic novel written and illustrated by Fred Perry, with cover art by Brian Denham. And...well, the back cover blurb you just read tells you pretty much all you need to know. It's Abraham Lincoln, Isaac Newton, Albert Einstein, Benjamin Franklin, and George Washington Carver (along with a few other surprise historical cameos) travelling through time to fight off a demonic Adolf Hitler, Mao Tse Tung, and Big Bad Josef Stalin (again, with a few surprise characters) and keep them from taking over all of time.

You may pick your jaw up off the floor now.