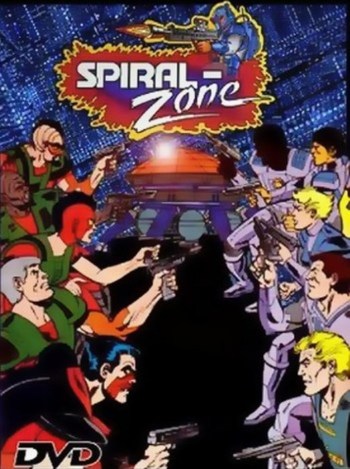 "Earth's most powerful soldiers are Earth's last chance to fight the Spiral Zone!"
Aboriginal Leader: The world has been destroyed before, and will be again.
Dirk Courage: Not if I can help it.
—from "Back to the Stone Age"
Advertisement:

Spiral Zone is a syndicated 65-Episode Cartoon from 1987, based on Tonka Toys' Americanization of a Japanese action figure line by Bandai. It has an unusually dark storyline for an 80s Merchandise-Driven action cartoon, complete with nods to the After the End and Zombie Apocalypse genres.

Exty Years from Publication (specifically, the far-flung future of 2007), a Mad Scientist/Diabolical Mastermind code-named Overlord covers much of the planet with his Spiral Zone, a dense, fog-like atmosphere which envelops about half the Earth in a spiral pattern. Inside the Zone, any unprotected person becomes a yellow-eyed, disfigured "Zoner" with no free will. Overlord and his enforcers, a motley crew of hardened criminals called the Black Widows, effectively control the minds of millions of Zoners, and they won't stop until they've enslaved the entire world.

The heroes of this bleak future are the Zone Riders, an elite team of "Earth's most powerful soldiers" led by Colonel Dirk Courage. The Zone Riders are sent on dangerous missions around the world to engage Overlord and the Black Widows in battle, destroy their existing Zone Generators (which automatically frees every Zoner in the vicinity), and prevent them from conquering any more territory. However, both sides are waging a desperate war of attrition, with no end in sight.

Also notable for having a theme song that freakin' kicks.