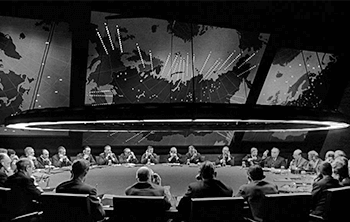 "He'll see The Big Board!"
"Gentlemen, you can't fight in here! This is the War Room!"
— President Merkin Muffley, Dr. Strangelove
Advertisement:

Take The Bridge off the Cool Ship, and put it in The White House or an Elaborate Underground Base, and what you get is The War Room. It's the nerve center for an entire country, criminal organization, secret society, hidden military base, or whatnot. It generally comes in one or a combo of the following three flavors:

Every version will prominently feature an enormous monitor that fills one entire wall. If The War Room is on Earth, the monitor will generally display a map of the world, marked up with real-time data about the organization's activities or serving as a Spreading Disaster Map Graphic. A large number of clocks above the big map, displaying time in different cities around the globe, is optional. All of this serves to keep the leadership (and the viewer behind the fourth wall) well-informed of the big picture.

Cue the ominous marching music as the leader sits down and listens while the underlings brief him on the situation. You can usually expect all the attendees in The War Room to be remarkably well informed of any relevant details and be able to instantly provide up-to-the-second intelligence when the senior person starts asking questions. Expect the meeting deciding fate of the 178 people in the Hostage Situation or how to take out the Big Bad's Doomsday Device to be concluded in less than five minutes.

The Invisible President, the Supporting Leader, The Brigadier and the Big Bad (all may or may not be part of The Omniscient Council of Vagueness) tend to spend a lot of time in rooms like these. Mission Control is invariably based here. If it's for the good guys, expect a lot of cheering coupled with a circular camera pan when The Hero reports his success.

Many naval vessels have a "ward room", the officer's mess, which is often misheard as the War Room. Here, the "war room" proper would be the Combat Information Center, or CIC.