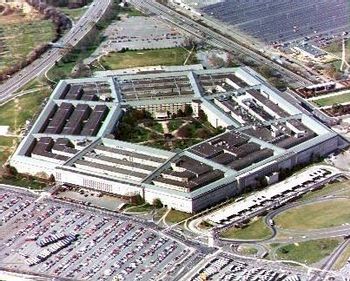 Your tax dollars at work!
"Headquarters? What is it?"
"It's a big building where generals meet, but that's not important right now."
—Airplane!
Advertisement:

The seat of the U.S. Department of Defense, located in Arlington, Virginia just across the Potomac River from Washington, D.C. This is where the Secretary of Defense, the Chairman of the Joint Chiefs of Staff, and all the service secretaries and service chiefs have their offices. Nobody ever mentions its street address, but it actually has one: 47 N Rotary Road, Arlington, Virginia, 22211.note  To add extra confusion, Pentagon mailing addresses are actually in Washington, D.C. despite the building being in Virginia. For example, you can reach the Secretary of Defense at "1000 Defense Pentagon, Washington, D.C., 20301".

Architecturally, it's a distinctive, pentagonal building, with 5s as a recurring theme: 5 sides, 5 floors, 5 concentric rings; also, whether by intent or by chance, the courtyard in the middle is just over 5 acres in area. It has 17.5 miles (28.2 km) of corridors, and those five 108° angle corners result in a very confusing layout. The interior is notoriously homogeneous; if you don't read the signs, it's easy to get lost there, since every area looks like every other area. Not to mention that it's easy to forget which floor you're on, as some of those corridors are actually ramps. Agent Maxwell Smart got lost inside it for several days. That said, once you get familiar with the building, it takes seven minutes or less to get from any place inside the building to any other.

Since the military's top brass does most of its planning there, and since the building is so easy to spot from the air, it was one of the targets of the September 11th, 2001 terrorist attacks. The structure survived in part because it had recently been retrofitted with kevlar.note  The Pentagon was actually in the middle of remodelling when the plane hit it. The side that was hit had already been partly closed because of this, which explains the comparatively low body count. The other, more important, reason the Pentagon survived is because it's MASSIVE – a fully-fuelled plane used as a missile barely made a dent in the thing. Well before that, however, the exact center of the building was a potential target of Soviet missiles; in fact, pre-9/11, the cafe kiosk at the center of the structure was informally referred to as the "Ground Zero Cafe". Even before the Cold War, when the Pentagon was built in the early 1940s,note  (amusingly, construction began on September 11, 1941 – 60 years to the day before the attacks) it was designed to be able to withstand a naval bombardment by battleships, being fairly close to the sea. Also, in terms of floor space, it is the largest office building in the world, and with good reason when you consider how massive the United States military is.

Since it was constructed in Virginia in the 40s, the Pentagon was built with "separate but equal" dining facilities and restrooms for white and black workers. This didn't sit well with Franklin D. Roosevelt, who ordered the building desegregated when he attended its dedication. The Pentagon remained the only non-segregated workplace in Virginia for the next twenty years, and it still has twice as many toilets as it actually needs.

The building is such a strong symbol of the American military that it's practically synonymous with it, or with the military-industrial complex. When the Defense Department makes an announcement, newscasters will say "The Pentagon announced today...". When the government pays a military contractor (what to the public seems like) an unreasonably large sum for a mundane item, such as a toilet seat or screwdriver, that's Pentagon Spending. When the U.S. military offers cheap assistance to movie producers in order to make a blockbuster movie showing tanks or fighter planes, that's Backed by the Pentagon. Et cetera. In the UK, "Horse Guards" (a building, not a group of people) formerly had the same connotations of being synonymous with the military, but this faded when the leadership moved out at the start of the twentieth century.

The distinctive shape and design of the Pentagon and its relationship to other stock mystical symbols as pentagrams lead some to imagine that the building is holding something inside besides a garden. For instance, early Internet culture half-jokingly spoke of the Shub-Internet, cause of all network slowdown, lurking beneath the Pentagon. In fact, the reason the Pentagon is a pentagon is rather more mundane: the original site of the Pentagon (Arlington Farm) was defined by local roads as an irregular pentagon, and the building was designed for maximum use of space; however, it was soon realized that it would block the view of DC from Arlington Cemetery, so they chose another site further downriver instead. The new site didn't have the same constraints, but there wasn't enough time or resources to conduct a major redesign, so they elected to just change it to a regular pentagon. It helped that FDR liked the design.

The Pentagon is served by the Washington Metro; the Yellow and Blue lines diverge here.

The building itself has appeared as a setting for a few works, but is not as popular a setting as the U.S. Capitol or The White House farther north.

The Pentagon in fiction:

Your identity has been noted. Greetings from Fort Meade.