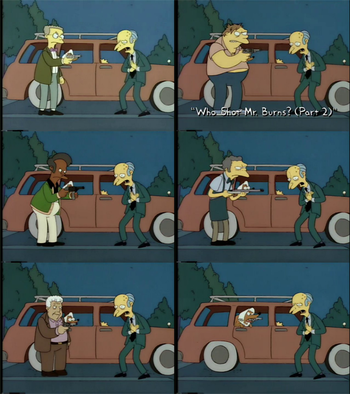 This past summer, all of America was trying to solve the mystery of who shot Mr. Burns. Then they found out it was the baby. (coughs) To keep this bombshell secret, the producers animated several solutions that were never intended to air. And to keep the show's animators, editors, staff, and hangers-on from leaking the solution, two completely different endings were produced: one real, one phony. Here's the ending you were never meant to see.
— Troy McClure, The Simpsons
Advertisement:

Multiple resolutions of a Cliffhanger or other point of suspense are filmed. Only one is the "true" resolution, intending to be shown. The others are designed to foil spies and spoilers in the event of the dreaded Content Leak.

A specific type of "foiler", which is any false information, such as decoy scripts, designed to throw spoilers off the track.

Compare to Multiple Endings, in which more than one resolution is intended to be shown. See Trailers Always Lie.

Due to this trope's nature, beware of unmarked spoilers in the listings below.