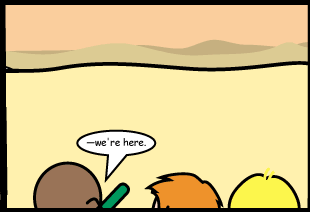 A character is out on a treasure hunt, when they are given a Treasure Map that supposedly leads the character to the location of the treasure. However, when you find where the X is located and you dig for the treasure, you find nothing. Turns out that someone gave you a fake map, either intentionally or accidentally.
Advertisement:

Put more simply, a character is given a false map that leads to them Going in Circles or leads them back where they started from, or into the middle of nowhere.