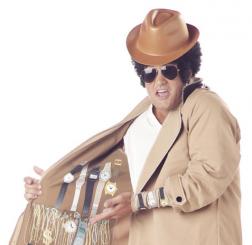 A character is walking down a seedy alley, and is accosted by a man in a trenchcoat. He opens the coat to show a display of fake watches and asks the character, "You wanna buy a watch?"

This is a visual way of establishing a place or person as being shady. Often will be parodied by replacing the watches with whatever item is likely to make the people around him go Squee and have a Nerdgasm. Another common variant is for the seller to be wearing numerous wristwatches on the same arm, pushing up his sleeve to display them. Regardless of circumstance, there's also about a 50% chance of the person being mistaken for a flasher, either by the characters or the audience.

When adding examples, please remember that the trope is the visual of having the goods inside the coat or otherwise hidden from view.

Sister trope of Trenchcoat Warfare where the coat is a coat of arms.

A shady robot tries to sell Rodney some ''watches''. The ''watches'' then tell Rodney not to buy them by revealing that they are fakes.

A shady robot tries to sell Rodney some ''watches''. The ''watches'' then tell Rodney not to buy them by revealing that they are fakes.