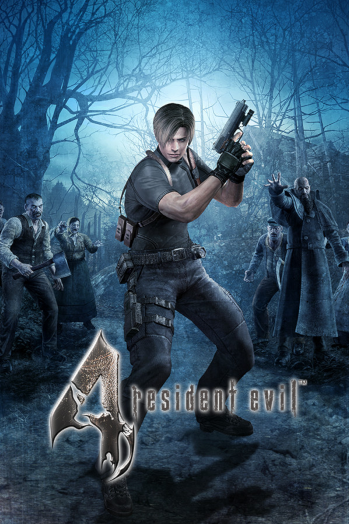 Viva Las Plagas.
Jack Krauser: What is it that you fight for, comrade?
Leon S. Kennedy: My past, I suppose...

Ahh, I'll buy a Description of Resident Evil 4 at a high price!

Resident Evil 4 languished a few years in Development Hell, however, as a result of changes to the game's premise and staff; Mikami's role also changed from producer to director. Resident Evil 4 was finally released four years after the initial announcement, taking the series to a radically new direction. The pre-rendered backgrounds and fixed camera angles of previous entries were replaced with an over-the-shoulder view that follows the player character around in a fully 3D environment. The shooting and inventory system were also revamped from the previous games and the storyline featured minimal ties to the previous games so Capcom could mark a new chapter in the franchise's storyline. The result is one of the most influential and critically acclaimed games of all time.

Six years after Leon's adventure in Raccoon City and its ultimate destruction, the Umbrella Corporation is bankrupt and Leon S. Kennedy is now working for the government. It has been decided that Leon's a bad enough dude to rescue the President's daughter from a cult operating out of a rural European village. Leon soon discovers that the cultists are infected by an ancient parasite that's not much better than the T-virus, and since this is a Resident Evil game, he has much bigger problems than another missing girl — three-stories-tall problems.

Originally announced and released as a GameCube-exclusive as part of the "Capcom Five", five games from Capcom designed to boost third-party support for the GameCube,note in the end only the "Capcom" part wasn't a misnomer - one of the five didn't even come out, and three of the other four - Resident Evil 4, Viewtiful Joe, and killer7, all saw PlayStation 2 ports, at latest, barely a year after their individual releases a PlayStation 2 port was released several months later, which features additional content, including a new scenario starring Ada Wong that focuses on the events of the main story from her perspective. Nintendo players later received a more definite version of game when it was released for the Wii in 2007 as Resident Evil 4: Wii edition, which features both the superior graphics of the GameCube version and the new content found in the PlayStation 2 port. Capcom also released a PC port in 2007 (two months before the Wii version); it promised the same GameCube graphics with PlayStation 2 content as that version, but ended up being a straight port of the PlayStation 2, an HD Edition for the PlayStation 3 and Xbox 360 in 2011, and a re-release on PC through Steam as the Ultimate HD Edition

in 2014. In 2016, the game was ported to the Xbox One and PlayStation 4. This game, alongside the Resident Evil remake, Resident Evil 0, 5, 6, and the Revelations duology were also ported to the Nintendo Switch in 2019. A heavily cutdown version of the game was also released for mobile devices on the Nokia NGage in 2005, Apple iOS devices and the Zeebo in 2009, and Android in 2013. A version remade in Unreal Engine 4 for the Oculus Quest 2 VR headset is slated for a 2021 release, allowing players to experience a first-person version of the game.

Got a selection of good tropes on sale, stranger!