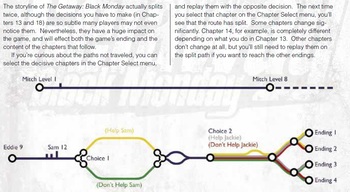 Damn, Eddie's got a lot of trouble ahead of him.note Sam too, but that's not the point. Unlike Mitch.
Oh yes, and then a prisoner begs me to release him. And a bit of text comes up to none-too-subtly inform me that "My Actions Will Have Consequences!" Of course they will! Walking across a room has consequences — the consequence is that I'm on the other side of the fucking room!
— Zero Punctuation
Advertisement:

A video game trope where decisions the player makes can change the course of the game. Being kind to someone early in the game might result in them helping you later on, while if you ignored them, you might need to find a solution without them. Killing a character might end up with a loved one swearing revenge, when he might have become your ally otherwise. These decisions and their consequences can range from world-changing to insignificant.

There are three requirements to be this trope:

Choices and consequences are most common in Visual Novels, with The Portopia Serial Murder Case (1983) being the Ur-Example. It also became very common in other video game genres by the early 2010s, especially in Adventure Games as well as Role Playing Games. The basic purpose of a C&C system is to validate the player's narrative decisions by showing characters in the game world reacting to it, similarly to how a Game Master would role-play NPCs in response to player actions in a Tabletop RPG. Of course, no virtual system currently offers the nearly limitless narrative possibility space a good GM provides, so the devs instead try to think of and to account for as many interesting narratively meaningful decisions as they can fit into a C&C system.

This can overlap with Story Branching, but in many cases, the core story doesn't change. Even though the plot may branch out briefly, key events will happen more or less the same, regardless of what you do, somewhat like The Stations of the Canon. How characters respond to you, and what tools you have to help with the situation will change, of course, and any game that deals heavily with this trope will likely have Multiple Endings.

A Sub-Trope to Event Flag. Contrast Karma Meter, where consequences are based off your general behavior, rather than specific decisions, and Morton's Fork, where your decision doesn't actually have an impact. See also For Want of a Nail. Often combined with an Old Save Bonus.