Always Over the Shoulder 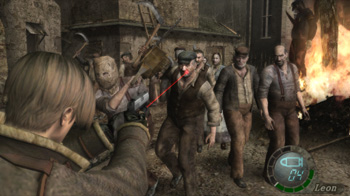 Want to get a good angle on that head shot.
Advertisement:

Since first person views are one of the best ways to avoid Camera Screw, a similar control in third person works just as well.

The three requirements to meet this trope are:

A Third-Person Shooter often uses this view since right analog stick (and mouse aim in keyboard + mouse control combination) becoming the norm and the increasingly clunky auto aim being phased out, thus playing just like a First-Person Shooter, save for not being first person. Heck, some first person games allow switching to third person, while keeping the control essentially the same. Note, however, that this isn't limited to Polygonal Graphics; it's also common in older 2D games featuring an "into-the-screen" perspective or a rotating Top-Down View because it reduces the number of angles the most conspicuous sprite has to be shown from.

This trope is named because "Over the shoulder camera" is a common term for this, after the cinematography trope Over the Shoulder.