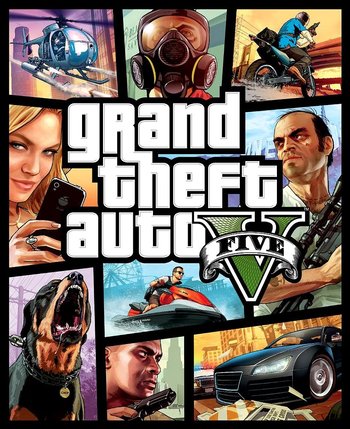 In pursuit of the almighty dollar.
"You know, I've been in this game for a lot of years... and I got out alive. If you want my advice, give this shit up."
— Michael De Santa
Advertisement:

Grand Theft Auto V is a game released for the PlayStation 3 and Xbox 360 on 17 September 2013, with an Updated Re-release for PlayStation 4 and Xbox One released on 18 November 2014 and (after a handful of delays) Windows PCs on 14 April 2015, and then years later on March 15, 2022 an "Expanded and Enhanced" edition was released for PlayStation 5 and Xbox Series X|S. The latest entry in Rockstar North's Grand Theft Auto series, it is set in the Los Angeles pastiche of Los Santos and its surrounding countryside of Southern San Andreas based on the greater Southern California, primarily the Mojave Desert. In a first for the series (unless you count Grand Theft Auto IV's Episodes from Liberty City adding in new characters), the game features three playable protagonists as opposed to just one, all from different backgrounds. They are (in order of unlocknote In regular gameplay. This doesn't include the initial "prologue" mission):

Together, They Cause (or Are) Crime. Players can switch between the three at any time once they meet the characters (with a few mission-related exceptions), and a major part of gameplay is heist missions in which all three characters take part. On the fly, the player can switch between, say, the guy taking hostages inside the store, the guy sniping cops outside, and the guy rappelling down the side of the building, while the game seamlessly takes over control of the character just vacated.

Several weeks after the release of the base game, the multiplayer component, Grand Theft Auto Online, launched. GTA Online is structured similarly to an MMORPG, with character customization, player housing, and a story to go with it. Rockstar has gone on record stating that its goal for GTA Online was to revolutionize multiplayer shooters in the same way that Grand Theft Auto III revolutionized the Wide-Open Sandbox genre. A gameplay trailer was released 15 August 2013 and can be seen here

To date, there have been several DLC packs for the game, consisting of item packs that grant new vehicles, weapons, and clothes for Online players. Heists for Online Mode were also announced prior to release, but fans were left waiting for... quite a while. Thankfully, they were finally added on 10 March 2015. Unlike GTA IV, which had two major DLC-based missions released (later compiled for a physical release), there have (as of 2022) been no such releases for GTA V.

A upgraded version with improved HD graphics and some other tweaks (such as a revised music selection on the radio stations) was released for PS4 and Xbox One in 2014. The PC port of the game was released in April 2015 to critical acclaim. A 9th generation port was announced in June 2020, was available digitally on March 15, 2022 and physical sometime in April for both Xbox Series X|S and PlayStation 5. Like the 8th gen port, the announcement promises enhancements to the experience. This announcement also reveals that Online is planned to be released as a separate game sometime after the 9th gen release. A sequel is tentatively scheduled to be released during Take Two's 2024 Fiscal year, according to a report in Bloomberg that was published in July 2022.