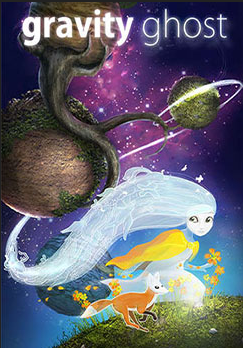 Gravity Ghost is a game where you play as the ghost of a young girl who has to fly around small planets in space to find animal spirits and reunite them with their bones so they can rest in peace. As the title suggests, this requires solving a fair amount of gravity-based puzzles. Successfully freeing a spirit nets you a cutscene showing the girl and her family while she was alive.

It was developed by Ivy Games, and released on January 26th, 2015 for PC. A Deluxe Edition of the game was released later, and ported to Playstation 4 on August 6th, 2019.