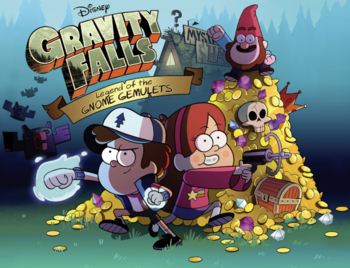 Gravity Falls: Legend of the Gnome Gemulets for the Nintendo 3DS is a video game of the popular Disney show Gravity Falls.

When an odd birdlike creature makes off with one of Stan's trinkets, he sends Dipper and Mabel to retrieve it in exchange for a family fun day and bucket of chocolate afterword. During this, they come across Jeff the gnome, who tells them that the magical gemulets (gem + amulet) of his people have been stolen. He enlists the kids' help, promising a lot of gnome gold. Dipper is given battle cuffs for short-range fighting and Mabel is given a stretching sweater for long range fighting. Now, the Pines twins must retrieve the gemulets from horrible beasts, search for lost items of the citizens and explore the different lands surrounding the town.

Legend of the Trope Gemulets: