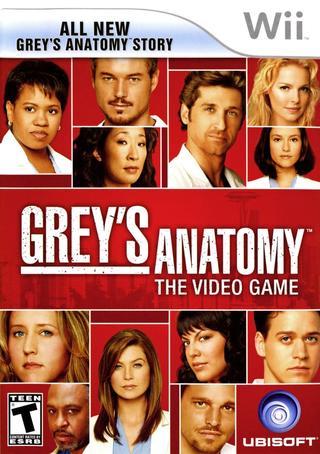 A slightly canon-divergent video game set during the fourth season of Grey's Anatomy with a storyline focusing on the main characters' love lives (including introducing random new characters to challenge them) and a diphtheria outbreak at Seattle Grace. The game follows a 5-episode story arc, with cutscenes and shifting player-characters being used to make it seem very much like it is a TV show.
Advertisement:

It utilized some of the most mediocre of 2009's CG capabilities to make a semi-successful attempt at capturing the actors' faces, ranging from Callie at the most accurate graph of Sara Ramirez to Bailey looking like a completely different person to Chandra Wilson.

The story of the game was written by the television writers, so what it lacks in looks it makes up for in plot. This is consistent throughout the different game modes available: finding your way around the hospital, finding your way through the characters' personal lives, and the mini game surgeries available.

It plays a lot like a widget game, with every gameplay option available to players accompanied by a mini game. It was released for both Nintendo and PC.