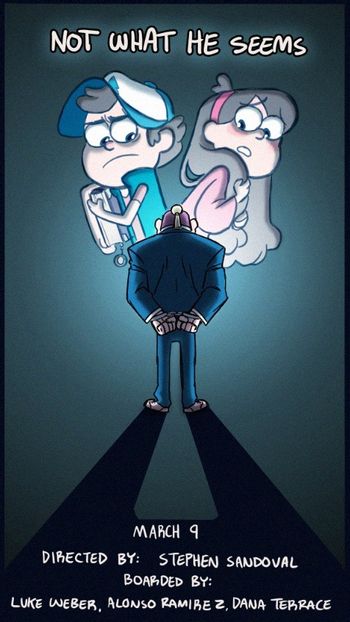 It's gonna be a bumpy ride, but it'll all be worth it. Just eighteen more hours. Finally, everything changes. Today.
— Grunkle Stan

Late at night, Stan powers up the Universe Portal. Journal 1 warns that doing so will cause gravitational anomalies and advises against it, but Stan disregards this, having come too far to stop now. As the countdown begins, one such anomaly occurs. Regardless, Stan eagerly waits for his work to be finished.

The next morning, the Pines family plays around with Stan's fireworks stash and water balloons. Stan considers telling the Twins something important, but chickens out. Privately, he notes that he can't keep his secret forever, and that the Twins will find out somehow. Before he can act on these thoughts, a squad of black op soldiers, led by Agents Powers and Triggers, appear and take the Mystery Shack. Powers reveals that since the zombie incident, he and Trigger have been watching the Pines family, and accuses Stan of stealing several dozen drums of toxic waste. Furthermore, he suspects there might be a doomsday device of sorts hidden on the Mystery Shack property. Stan insists that he was restocking the gift shack, but is taken away. While Powers goes with Stan to the police station, Trigger takes the Twins to child services.

Using his one phone call, Stan tells Soos to guard the vending machine in the Mystery Shack gift shop. Meanwhile, the Twins decide that to prove Stan innocent, they need the Shack's security footage of the gift shop. Mabel provokes Manly Dan into running the government car off of the road by mocking Sev'ral Timez, and the Twins make their escape. Trigger insists that the Twins are putting their faith in the wrong man, as he's seen the con Stan's allegedly running before. Dipper tries to ignore him, but his words hit the mark.

Meanwhile, Grunkle Stan is trying to figure out a way to escape and get back to the Mystery Shack to witness the Portal's activation. When his countdown watch alerts him to an anomaly, he gets an idea. At the same time, with his laptop synchronized to the time of the Portal's activation, Old Man McGucket decides to flee town before it's too late.

Back at the Mystery Shack, the Twins use Mabel's Grappling-Hook Gun to break in and sneak in to Stan's office. Reviewing the security tapes from last night, they see that Stan was stocking the gift shop...before leaving and returning with drums of waste! But then they find something even more damning—a box full of fake IDs, a newspaper clipping on an unknown grifter, and another with the headline STAN PINES DEAD. The Twins are unable to process what they've found. Looking for more clues to solve this mystery, they find a note for a code of some sort. Mabel realizes that the letters and numbers refer to the vending machine.

At the police station, just as Powers is about to take Grunkle Stan to Washington, a gravitational anomaly occurs, allowing Stan to escape. He pays off a cabdriver to lead the agents on a Wild Goose Chase. The rest of the government squad pulls away from the Mystery Shack to chase after the cab, leaving the vending machine unattended. Soos arrives, determined to carry out his orders. Dipper and Mabel arrive and try to convince Soos to move, but he refuses. A brief scuffle ensues, ending when the secret passage opens. Entering, they find Stan's secret lab, the Universe Portal...and the other two Journals! Outraged that Stan had kept the journals hidden from him, Dipper assumes that the agents were right and that Stan is a criminal. He uses his black light on the Universe Portal's entry, revealing another hidden message—that the Portal, once at full power, can destroy the world! The trio try to activate the emergency shut off, but before Dipper can push the Big Red Button, Stan appears, pleading with them not to turn it off. Dipper, furious at all the secrets and lies Stan's told, refuses to listen. Before Stan can explain further, the most powerful of the gravity anomalies ensues and sends everyone in the room flying, as well as affecting the entire town. Mabel, her leg caught on a cable, is the only one close enough to the Portal's shut-off. Dipper tells her to push it, as the Portal could destroy the Universe, but Stan begs her not to, as while he's always done unpleasant things, it's always for his family. Torn between her family, Mabel is forced to make an impossible decision.

Mabel lets the Portal remain open, much to Dipper's shock. The countdown reaches zero and a huge flash envelopes everyone, and the Mystery Shack seems to fly...

...Before crashing to the ground. The bunker is now in ruins, but everyone is alive. An unknown figure comes out from the barely functioning Portal, and takes Journal 1, revealing his six-fingered hand. Stan reveals that this man is the Author of the Journals...his brother.

Not What He Tropes:

A figure walks through the portal. Stan reveals that it's his twin brother, who wrote the Journals.

A figure walks through the portal. Stan reveals that it's his twin brother, who wrote the Journals.