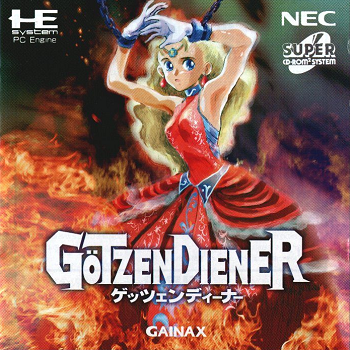 Time to meet your Princess Maker.
Götzendiener,note German for "idolater", more literally "false god's servant" also rendered as ゲッツェンディーナー, is a Dungeon Crawling Action-Adventure comparable to Mystic Towers and ICO. It saw release on the PC Engine in november of 1994 and like many late titles remained exclusive to Japan. The decision to keep the game on home soil may have also been influenced by the fact that the video game is based on a novel, which was not translated either. The novel was written by Hiroe Suga and published in Dengeki PC Engine from February to July of 1994. A handful of studios worked on the video game, but the main developer is Studio Gainax while NEC Home Electronics served as the publisher.
Advertisement:

Literally every article written about Götzendiener opens with a description of the title sequence and that's for good reason because it pulls a flawless Bait-and-Switch. A lovely princess gets abducted from her room by the forces of evil. An army sets out to rescue her. All fall but one lone warrior, who bravely marches on to confront the demon king holding the princess up in chains. At this point the cinematics stop and the sequence continues with in-game graphics. Gameplay is just around the corner! One mighty sword swing slays the demon king... and then the warrior succumbs to his wounds. The princess breaks free, ties up her hair, rips off her dress, and picks up the warrior's sword. Demons be warned.

As intriguing as the title sequence may be, the gameplay is unable to hold up due to lackluster execution. Looking at the release dates of the novel and the game, this is as good as certain due to a rushed development. The first thing to say about the gameplay in Götzendiener is that it is slow. On one hand, the diagonal movement required in the isometric field does not agree well with the d-pad. On the other, the realistic trappings of a Cinematic Platform Game are present but none of the Anti-Frustration Features. Notably, Princess Misa cannot run, which is bothersome given that the palace she's escaping is spacious and sparse. On the rare occasion a room is decorated, it's because the decoration is part of a puzzle. Which means there's not a lot of puzzles. There's not a lot of enemies either.

Nevertheless, the game's minimalism, whether intentional or not, is tastefully implemented. The remnants of abandoned gameplay go hand-in-hand with the notion that the big battle has already been fought and that the princess's sole task is to escape the few monsters that haven't already been dealt with. Similarly, what little of the novel's plot made it into the game is a better fit courtesy of the overall sense of abandonment.