Video Game / Glory of Heracles IV: Gift from the Gods 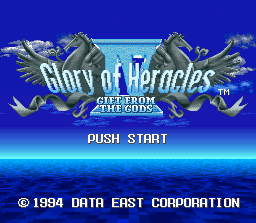 Glory of Heracles IV: Gift From the Gods* ヘラクレスの栄光IV 神々からの贈り物; Heracles no Eikō IV: Kamigami kara no Okurimono is a JRPG released by Data East for the Super Famicom in 1994.

The plot follows the player, his friend Plato and Epipha from the mythical city of Atlantis. Their professor Arlmoa has been researching possibilities of everlasting life, but this enrages the gods. Heracles leads an invasion on the city and is too late to stop things once he realizes the people there were not evil like he was told, but only harmless scholars. During their escape attempt Arlmoa and his students find the Pandora's Box and unknowingly set free the evils contained within it. The protagonist and Plato are shoved inside the box and awaken 9000 years later as immortal people-possessing beings. With Heracles' help, they now must bring order back to the world.

The game's main mechanic involves taking over the bodies of various NPCs which have a preferred weapon and three unique skills. Up to four characters can take part in a battle at once and the three allies act on their own if the protagonist is knocked out.

After much work from fans, it got a unofficial translation in December 2016 that also added several improvements to the game's interface. It was followed by Glory of Heracles for the Nintendo DS.